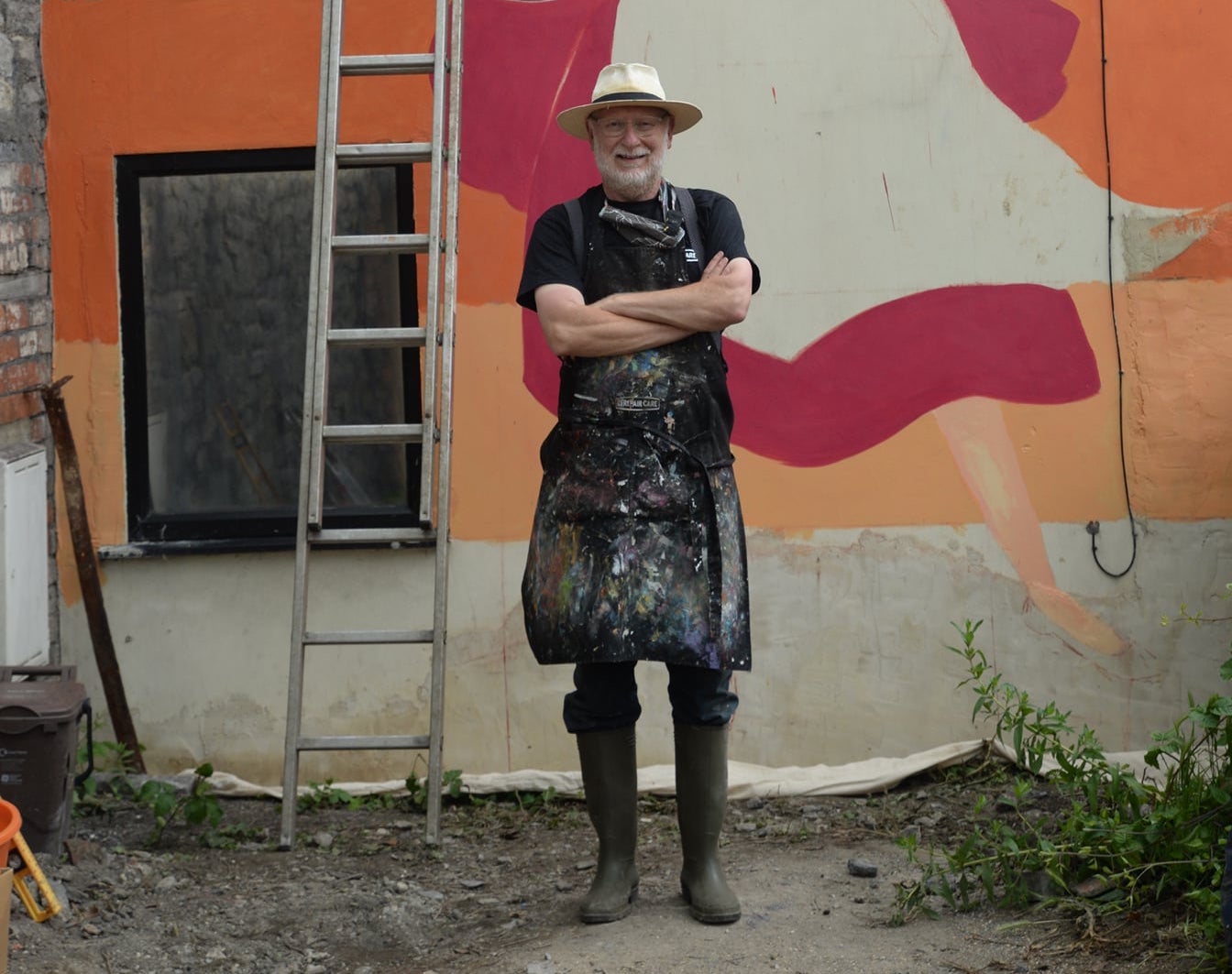 Posted at 16:43h in Core Artists, Interviews by HOTT

Frank Harwood’s forthcoming exhibition at Heart of The Tribe Gallery takes place from the 3rd of June to the 28th 2021. It will feature work from a decade ago and pieces only recently completed. His large, bold paintings are all acrylic on canvas and Frank will also be exhibiting his very brightly coloured Papier-mâché sculptures, which he describes as “Three dimensional paintings.”

Frank is from Darwen in Lancashire, was born in 1955 and studied Fine Art at the University of Central Lancashire. On leaving, after a period of travelling, he started work as a designer in the paint industry,  where he made his career.

Frank told me: “Since leaving art college I hadn’t done any creative work for about 30 years. With a busy family, and a full time job I found I didn’t have the time to do anything creative myself. I did however ensure that as a family we visited galleries, art events and of course festivals at every opportunity, so I was still visually learning, but not creating. In my fifties illness kept  me off work for a couple of months. My wife insisted I use the time to start painting again and it grew from there.

I started in exactly the same way that I’d been painting at art college, working in a ‘pop art’ style, using a heightened  colour palette and graphic outlines; but always figurative. I wonder now how I would be painting if I’d been doing it continuously after leaving art college. 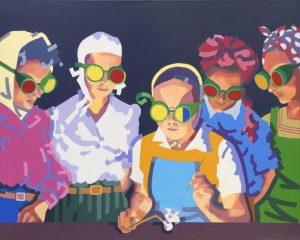 I was going through a lot of images I wanted to get onto canvas, getting comfortable with painting again and proving to myself that I could do it. Once I’d built up a body of work I was able to step back from it and see what I had achieved. I still like using a simple graphic style, similar to my childhood comics, with bold outlines, flat colour fields, and areas of bright pattern. I choose subjects that have a resonance, that suggest moods and half remembered experiences. My paintings are not autobiographical, but they are my way of reflection, self examination and meditation. 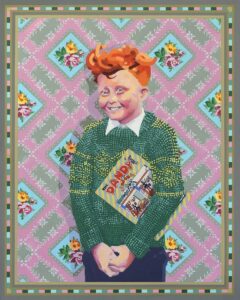 I’ve been on a steep learning curve. This year has been dominated by Covid, but I’ve had the gallery, Heart of the Tribe has been very important to me. It’s given me confidence. When you suddenly start painting, with no history, galleries aren’t usually interested. Kim (Von Coels, the manager of the gallery) told me my art was good, breaking down my imposter syndrome, the feeling I wasn’t ‘doing it right’.

My paintings tend to be larger than life, they aren’t abstract, quiet, calming or meditative. They are insistent, and I hope, relatable. My work holds evocative memories, for me and for others, even much younger people.

When I started painting again I initially used images from the internet, but as I gained in confidence I became a bit freer, less tied to formal painting, and started creating a series of sculptures. I could walk round them and then they became the basis for paintings.” 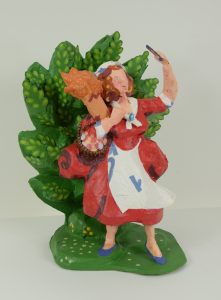 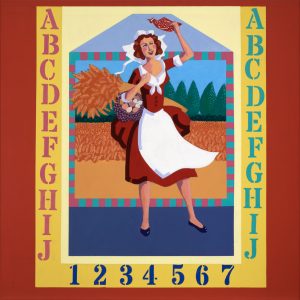 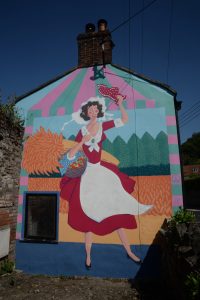 A year ago Frank started work on the series of ‘The Woman Waving’ pieces. He began by creating the sculpture,  like all his sculptures it was inspired by Staffordshire Pottery – small, domestic sized pieces.

“It’s like making a puzzle,but unlike pottery, you don’t need much equipment. The materials are just cardboard boxes that would normally get thrown out and glue. I don’t even use wire frames. I make a skeleton in two planes which makes a surprisingly rigid structure, then add to it. When it’s finished I can move it around in three dimensions to get the best angle for a two dimensional image, then draw it.

After completing the Woman Waving sculpture I made a detailed painting of it. I’d found a wall on a house in Chilkwell Street in Glastonbury that I thought would make the perfect canvas for a mural. I approached the owner and found him enthusiastic. I had the painting photoshopped onto a picture of the gable and presented it to him for his approval, he was unbelievably supportive. Working on that big scale is liberating in itself. 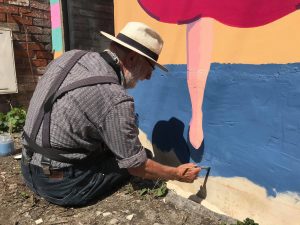 I’ve done two more sculptures since then. One is Adam and Eve and is based on the paintings of the German Renaissance artist Lucas Cranach, but also harks back to my earlier series of paintings of people with tattoos. This piece will hopefully  become another mural in Glastonbury, to coincide with the opening of the exhibition. 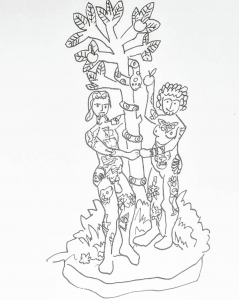 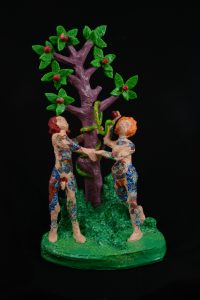 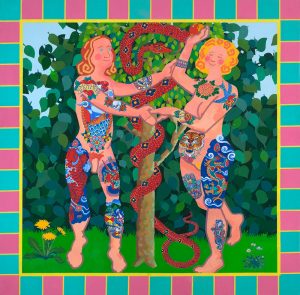 People I’ve met through the gallery have been very supportive, I don’t feel I have to prove anything, I’m accepted as an artist. At college you rightly had to justify everything you did.  When  I came out of  art college I felt and felt a little adrift and so I stopped producing any art.

When I discovered Grayson Perry, he cleared away a lot of  pomposity and preciousness out of the visual arts for me. It particularly struck me when he said here has to be a conversation between the viewer and the artist and that people go to art galleries on their day off. I don’t think looking at art shouldn’t be like doing a cryptic crossword. The opportunity to do something simple and honest has been really refreshing.

In the last year instead of ‘mining my own history’ I now look at more traditional painting  themes – Adam and Eve, the Three Graces, the Ship of Fools.

I haven’t stopped working over lockdown, I’ve been re-working paintings and my sculptures are getting more and more complex, the latest, of contortionists, was quite a technical challenge. 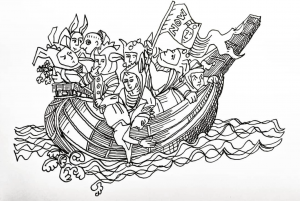 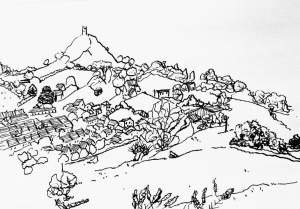 I have done a lot of drawing too, that gives you discipline. I now know my basic drawing is much better than what i was doing ten years ago. Covid gave me that time. I think my work is simpler now than it was before, much more direct. The volume hasn’t come down much though, I haven’t lurched into subtlety! I’m a show off and I’m excitable, I admire quiet art, even if I can’t do it.” 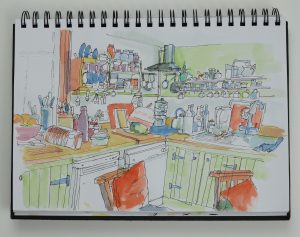 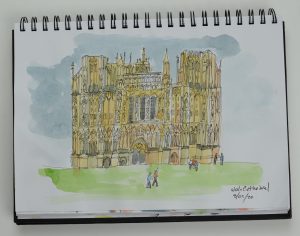 You can find out more about Frank Harwood on his website. 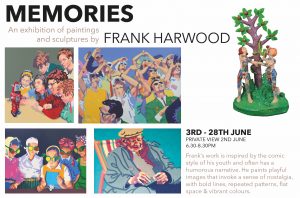