Jon Minshull – Interview with the Artist 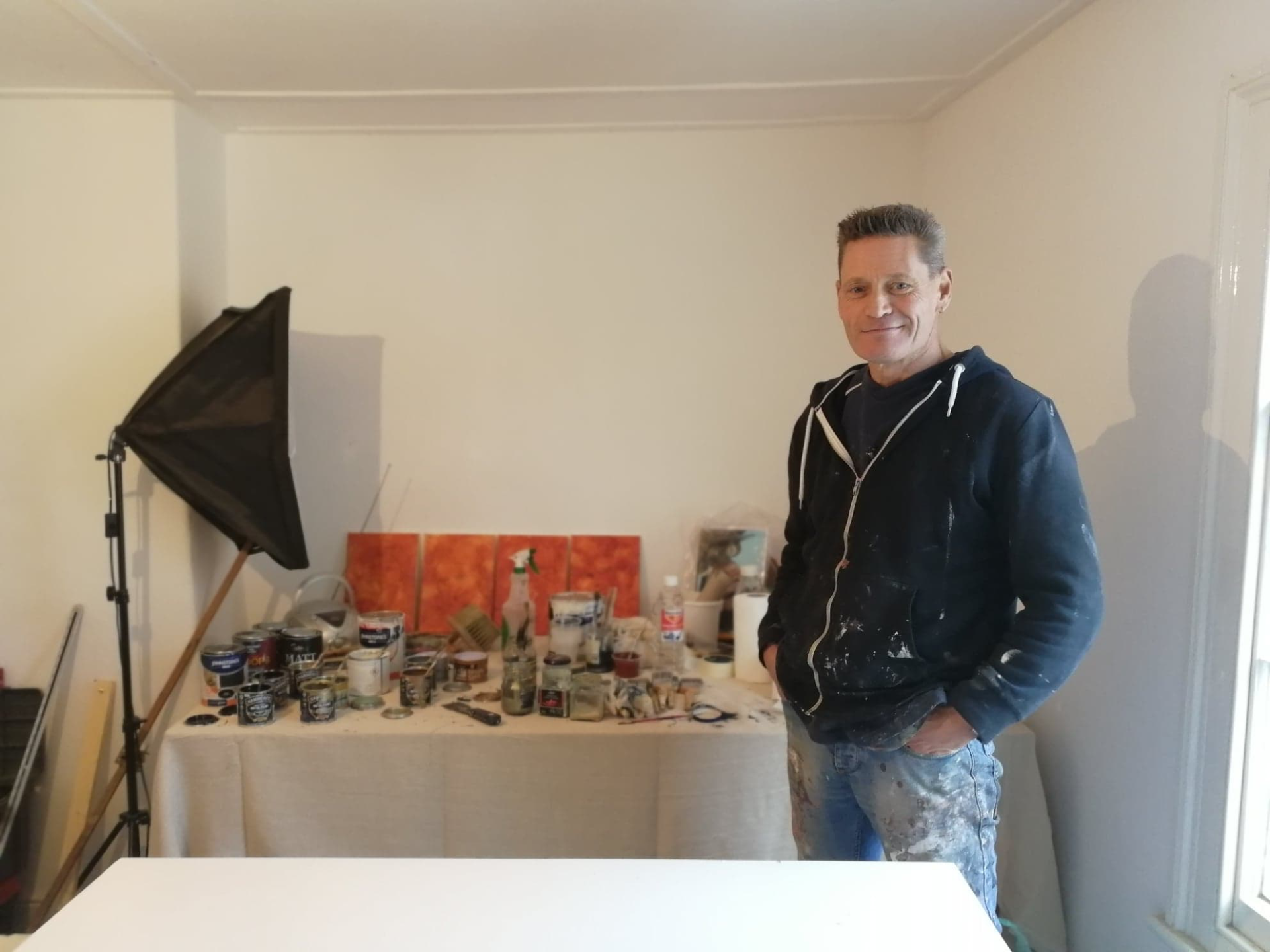 Posted at 09:42h in Core Artists, Interviews by Vicki Steward 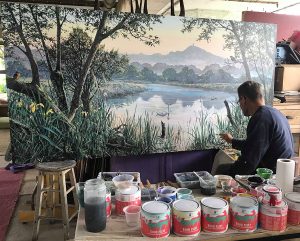 Jon Minshull’s work takes many forms, but he is best known in Glastonbury for his large, naturalistic and beautifully executed murals throughout the Town. For many visitors Jon’s is the first art they see, as his mural of the Somerset Levels adorns the wall outside the Glastonbury Information Centre. The children at St Benedicts school are greeted by his paintings every day, in their reception and playground. You can also appreciate his artwork on the Goddess Hall, the Glastonbury Experience building and passageway and in the Goddess Temple, while campers at The Old Oaks Touring Park can enjoy his vast panorama inspired by the Somerset landscape. 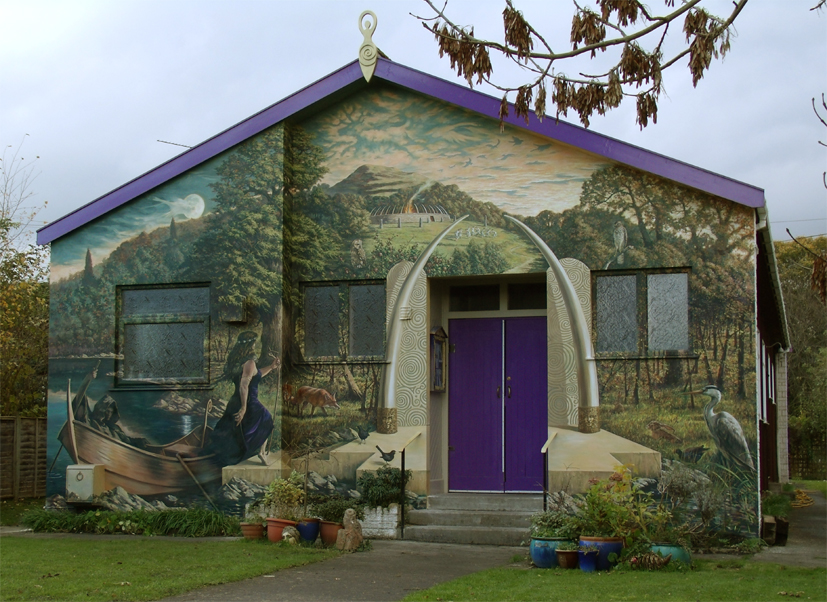 Jon was born in Staffordshire in 1964. Even as a child he loved Renaissance, Baroque and Victorian art and had a fascination with art history. His family encouraged his interest, his Mum was very supportive, showing him how to paint in oils when he was only seven years of age. He cites his major influences as Velázquez, Klimt, Anders Zorn, John Singer Sargent and the Symbolists of the Belle Époque.

Jon studied illustration at Brighton Polytechnic, spent a couple of years working as an illustrator in London then taught art at a technology college for 7 years before deciding to quit his job to ‘have an adventure’. He sold his house and travelled to Costa Rica in 2000 on his brother’s suggestion.There he found a place in the jungle to build a house and live in unspoilt tropical beauty. He then came to Somerset in 2001, visiting with friends, and fell in love with the atmosphere, history and surrounding countryside of Glastonbury. He found himself on a dual adventure, spending half his time in Somerset, half in the jungle in Costa Rica where he is “making gardens in the wilderness – living close to the land” 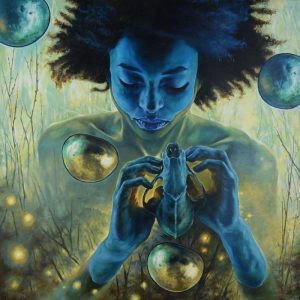 What attracted you to exhibit at Heart of the Tribe?

Jon is the first artist to exhibit at the Heart of the Tribe gallery, having been invited by gallery curator Kim Von Coels, he tells me:

“I think Glastonbury has an incredibly supportive cultural network. Kim is a very motivating force, a very positive energy in Glastonbury. Heart of the Tribe is an independent gallery with no agenda other than promoting good art, there aren’t many galleries like that around here. It’s not a typical gallery for Glastonbury aiming for the tourists who come for crystals and dragons. Rather, they aim to encourage creativity in the many local artists around Glastonbury and Somerset”.

Gallery owner Julian Clark is giving artists the opportunity to create in the studio space at the top of the gallery, Jon is using the space to work on some commissions, but will paint some new work for the gallery soon. “It’s a good-sized space that you can make a reasonable amount of mess in, I’m the first to use the space but the plan is to have several people working there. It’s nice to be in a place that fosters creativity and you feel welcome.”

Jon is used to working in other people’s spaces, as having committed everything to his house and studio in the jungle in Costa Rica, he has no permanent studio in Somerset, despite spending much time in Glastonbury. I ask him about his relationship with this most iconic, and quirky, of Somerset’s towns:

“I love the landscape, the history and cultural diversity of Glastonbury, the fact you can walk down the High Street dressed in anything you want and no one bats an eyelid. I walk around the Tor and the lanes virtually every day, it’s one of the most beautiful areas of England. Nature, for me, is where all health and vitality comes from, it’s great to live somewhere where you can walk for 5 minutes and be in quiet woodland”. 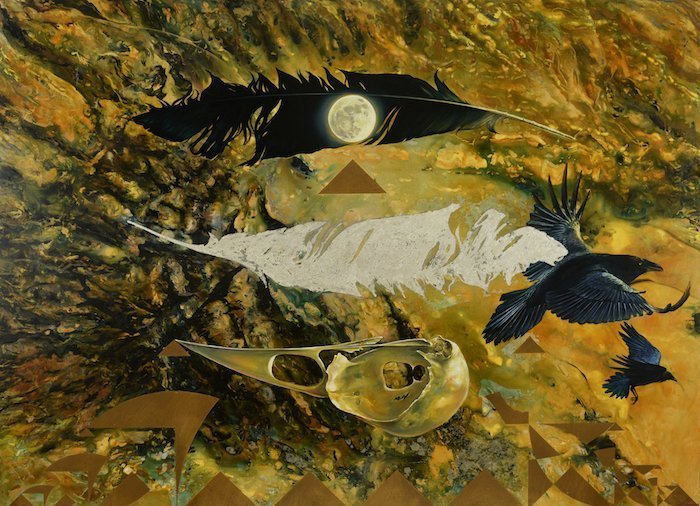 Jon explains that it would be easy for his work to be recognized stylistically if he was to produce the same style and imagery in different forms. In fact he works in completely different styles, in multiple mediums, and with a wide variety of subject matter. Presently, he is dedicating himself to works that incorporate sacred geometry, symbolism, landscape, figures, objects from nature, combining elements in a multidimensional way that reflects the multi-layered reality that we inhabit.

It occurs to me that this combining of elements sounds reminiscent of spell casting (I’ve been in Glastonbury for too long, evidently) I ask Jon if there is a magical element to what he does? He tells me

“Everything is magic, I really mean that, but not in a hocus pocus way”

The main collection of work that Jon is exhibiting at the Heart of the Tribe Gallery are paintings themed around the Cross Quarter pagan festivals that mark the turning of the seasons in the Northern hemisphere. I ask Jon about the process of creating these works:

“I created abstract backgrounds inspired by natural forms, looking at the planet from satellite pictures. I tried to recreate the processes of nature – erosion, water flow. I selected the ones that would be right to work up into concept pictures, with a sacred geometry grid underlying it. It’s about different layers of reality, cut out sections looking onto landscapes, reflecting a multi-dimensional sense of the universe”.

The works were painted in Glastonbury, but many of the elements were inspired by the jungle, I ask Jon if travelling between two such different environments creates a feeling of disconnection, but he reveals that this dynamic tension is a wholly positive force on his art and life:

“I’m an inhabitant of the planet, I’ve done a lot of travelling. What I experience in Costa Rica in a tropical jungle is so different from the temperate climate of the Somerset Levels. The contrast makes you really appreciate both experiences. For these paintings I transposed tropical plants, landscapes, fish etc, to represent the cross quarter festivals. I’m trying to make the imagery more universal. It’s about the pure process, not particular myths and legends. I strip them down to the essential processes of growth and decay. The sacred geometry I use in each one is particularly related to the process and there’s a whole set of concepts linked to it. For instance in the the Samhain piece the geometry corresponds to the square root of two, it’s about breakdown and rooting into the earth, philosophically. The pentagram in the Lammas painting expresses the phi ratio and the fundamental growth principles in nature. Sacred geometry to me is a language, the fundamental language of the universe, embodied in it is the fundamental code, extrapolated out into the Universe”

I ask Jon if his work is influenced by psychedelics, but he tells me “Nature is my most intense inspiration. There’s the highest biodiversity on the planet per hectare in the jungle of Costa Rica, it’s so intense, you don’t need any other inspiration” 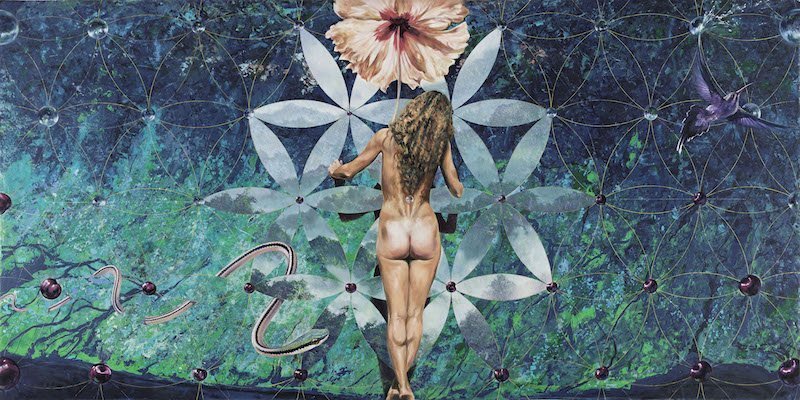 Jon paints most of his murals in oils. He starts  by mixing up the paints in jam jars, it can take half a day to mix up all the paints he needs, a dozen or so pots. It’s just the start of what is a very physical process, climbing the scaffold, stretching and bending, It’s not without its risks either, Jon says the tendency is to take a step backwards when he completes a detail of his work, rather perilous when working on a ladder metres from the ground.

For the mural of St Peter in the village church of Lamerton in Devon, he painted the highest parts from his Dad’s rickety scaffold tower. “I realised the fresh plaster work already resembled clouds, I just painted the blue of the sky around them so I didn’t have to spend too much time up there!”. Jon tells me he used a good friend from Glastonbury as the model for St Peter.

The ‘Our World’ mural concept and finished artwork was a collaborative process with St Benedict’s School children, Jon’s design is based on the pupil’s ideas for what they wanted to see on the mural. Each child then made a ceramic tile, these tiles make up the letters ‘Our World’. Jon tells me he had to put a cordon up around him as he worked. Every day at lunch time the kids would break through it in their enthusiasm to watch him paint. One girl, who was there every day, endearingly asked him “I’m your best customer aren’t I?”

If you stand by the Natwest cashpoint in Glastonbury High Street and look up, you’ll see that Jon has started transforming what was a Georgian building, once painted in an ugly burgundy, into an ancient temple. He’s created the illusion of stone columns and a frieze of figures in trompe l’oeil, but has been unable to complete the work. Four blue panels should feature murals representing the Cross Quarter Festivals, with eight foot high figures representing each season. He’s done the designs, but has to wait as the building’s owners can’t get planning permission. They need to find another example of a mural on the outside of a Grade 2 listed building, to give a precedent. “We’ve completely renovated the facade of the building, restoring stonework and the original Georgian windows, We’d like to continue transforming it into something amazing that expresses the spirit of Glastonbury – that would become a tourist attraction in its own right”.

Jon’s mural work is not restricted to walls. He painted a giant squid attacking a sperm whale on his brother’s car in San Francisco. They were amused to find the artwork mentioned and pictured on Reddit, with the title  ‘Terrible taste, excellent execution!’. Jon visits his brother every couple of years and is planning to pursue more commissions over in California: “It’s a very fertile territory – people out there have money and are into creativity”. Jon tells me they have a ‘Silicon Valley Arts Week, like we have a Somerset Arts Week. 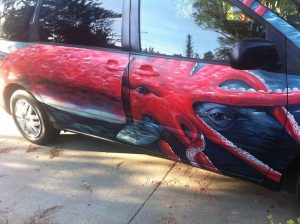 Quantum Consciousness and the Pursuit of Meaning

I ask Jon what he is most passionate about:

“I realized a few years ago that the pursuit of comfort was not high on my list of priorities. Beauty, experience and understanding are much more important to me. I’ve sacrificed comfort and security, but I’ve never regretted that. It’s linked to my understanding of life and the universe, everything changes, everything evolves, you’ve got to be in a place that’s least rooted, least fixed in mental structures, to embrace that change. I want that edge, as soon as you start getting comfortable you might as well dig that hole”.

“The whole idea of being recognized as an artist is not on my list of objectives. I don’t want to be famous, but I want people to recognise the paintings, not me. The cult of personality is the opposite of what I believe in. But I do want my paintings to be seen and to influence people in a positive and inspirational way”. 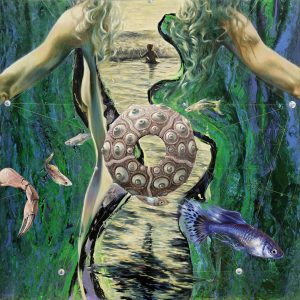 The Black Pearl by Jon Minshull