Posted at 10:24h in Core Artists, Interviews by Vicki Steward

Painter Ruary Allan was born in 1967 and spent his early life in Edinburgh. We meet at the Heart of The Gallery Studio space, where Ruary is currently working. I ask him if he’s always been an artist?

“Yes, in the sense I’ve always made art, except between the ages of 10 and 16. I wasn’t encouraged as a kid, but then I rediscovered it in my teens. My family didn’t really value art, my art teacher didn’t like me..For my O Level piece. I painted a sheep’s skull, I got so into the fine detail I didn’t finish it. I got a ‘D’!”

Ruary tells me he’s spent much of his life travelling and has lived in cities around the world including Oakland, California, Tokyo and Barcelona. He first showed his art in the car park of Grateful Dead shows in the Oakland Coliseum.

He’s attended six Burning Man festivals and spent two years living in the Mother’s Cookie Factory in Oakland in the early 2000s where they held big parties. California had a really vibrant scene, Oakland was coming to life amid dot com booms and gentrification. At this time Ruary was working as a geologist, he painted as much as he could but found it hard to switch between painting and work.

“The ex governor of California Jerry Brown had a big house that was a hub for radical people and emerging artists, I started hanging out there and organised a couple of art exhibitions for emerging local artists I also met people like the psychedelic artist Mark Henson at festivals where we were exhibiting. In those days most rave parties had live artists, mixing art and music”. 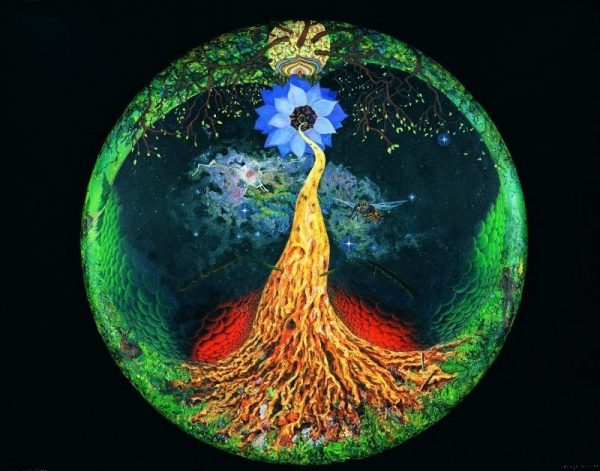 “After San Fran I went to Japan, which was amazing and I did some work there. I travelled for a few years around the world, on a budget and mostly by bus so I could make the trip last as long as possible. I went to some amazing places doing photography and travel blogging, it’s all on my website www.artalchemist.com. I got quite good at photography and was picked up by Getty Images, but I didn’t make much money out of it!”

Nowadays he gets by renting out his parent’s house in Scotland and lives cheaply in his van around Glastonbury, “It gives me a chance to explore areas I need to do my art. I need quite a bit of mental freedom to get into it. I’ve been struggling to paint, I can only do small things in the van so it’s a total boon working in the Heart Of the Tribe studio at the moment. It’s a wonderful, exciting community project. They are trying to do right by everybody, so everybody benefits”.

“Glastonbury is a freaky little place and it’s parochial at the same time. Its own little world – very eclectic, non judgemental, You see music of all kinds here, it’s a cool place to be. But I try to get up to Scotland once a year. visit my Mum, get into nature”. 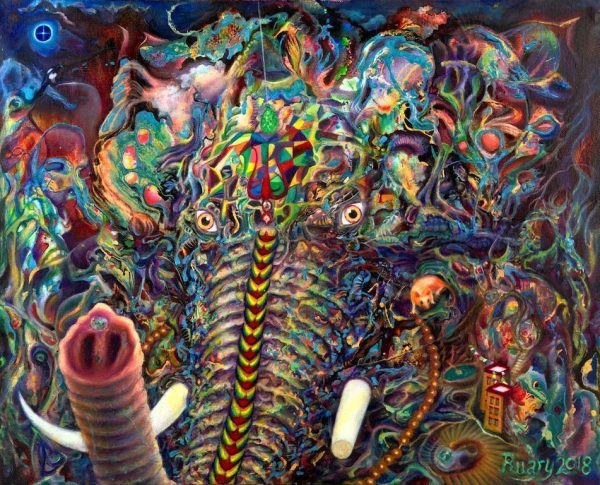 Ruary has experimented with a variety of mediums, but rarely ventures beyond oil and acrylics, lately he’s been working in acrylic paint pens. He’s also  experimenting with an old surrealist technique – mixing oil with turps and white gesso and swirling it on like plasticine to give a marble texture. He studied Geology at St Andrews University and, like the artist Roger Dean whom he admires, takes a lot of inspiration from rock formations. “I’m trying to build up, using chaotic processes, the processes of nature”.

“A lot of my work begins as cartoons or abstract forms – quickly derived images end up being complex narratives. I introduce intentional elements that put my work in the context of spiritual change. The relationship of man to nature, to evolution, to recognizing consciousness in the Universe. That’s what I see when I’m creating, but people get other things looking at my work. There’s quite a lot of comedy in my art. When I do shows at festivals I get fed up with the serious visionary art, I like the ridiculous”.

Ruary is a self taught artist but tells me he has studied mainstream art history enough to appreciate many different painters, particularly Rembrandt, Dali, the Surrealists and Max Ernst. 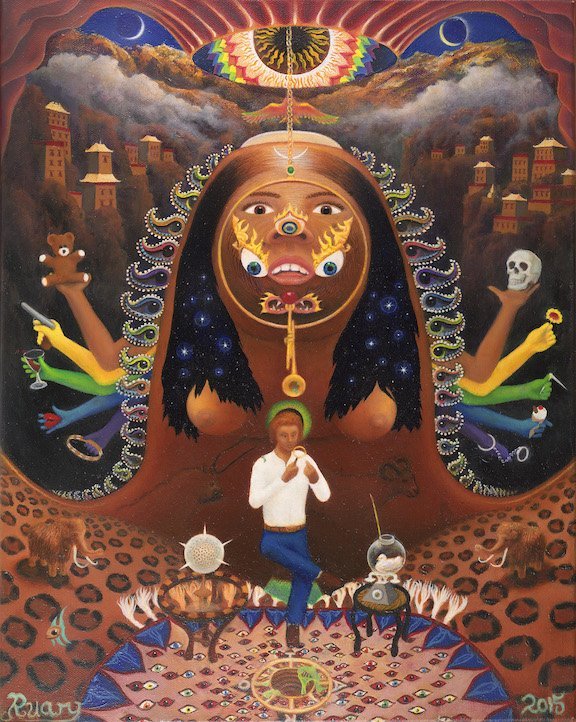 “I think of myself as a surrealist, an unconventional image maker. I use a lot of stream of consciousness, sacred geometry. Everything comes out that is in my head, often it’s politically related, I hope that makes it relevant, that it says something to the viewer”.

“Psychedelics are an influence on my work, visually and spiritually. I did Ayahuasca in Peru, that was an amazing experience, that confirmed a lot of my hopeful beliefs in things like the spiritual world. Living in the modern world it’s easy to fall back into a materialist viewpoint. I try to be right by people. Fundamentally I think the Universe is consciousness. It’s all about transformation. I try and use my talents to create art that is interesting and deepening for people. It’s all about changing our consciousness so we survive, in an environmental sense. We need to change our ways, we need to learn how to be happy and fulfilled without being materialistic. I hope I can help people find that”.

“I had dreams about Tibet when I was an infant, almost like a memory. I’ve spent time at  Kagyu Samye Ling Monastery and Tibetan Centre in Scotland. Buddhist philosophy really interests me, they have a science of the mind. I did a Vipassana course in India, proved it really works and that my heart was capable of great love,  Vipassana really cracked it open. I like to convey the experience of peak experiences like that, when you feel a great sense of brotherhood, of sisterhood with everything”.. 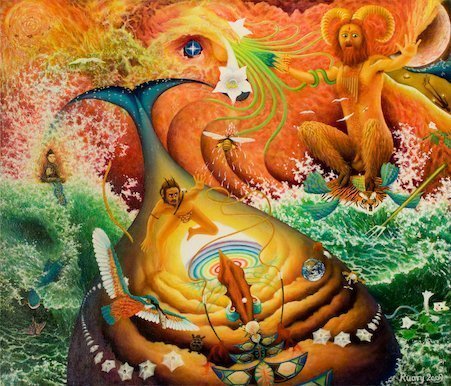 ““I take my work out to music festivals, psytrance festivals sometimes have proper galleries. I exhibited at the Modem festival in Croatia last year. But I’ve not been making a living as an artist, I need to move into galleries and sell the originals. You’ve got to be pretty obsessive. I’m treating my art as work now, as if my life depended on it”.

Ruary is quite anti Facebook, telling me “I’m glad that the gallery can do the dirty work promoting me on social media and I get to keep my hands clean!”.

“Life is shit sometimes for so many different reasons, I try and keep positive I’m really focusing on my work, it helps me with the personal challenges of life”.

You can see more of Ruary Allan’s work on his website www.artalchemist.com which includes his art, photography and travel writing.