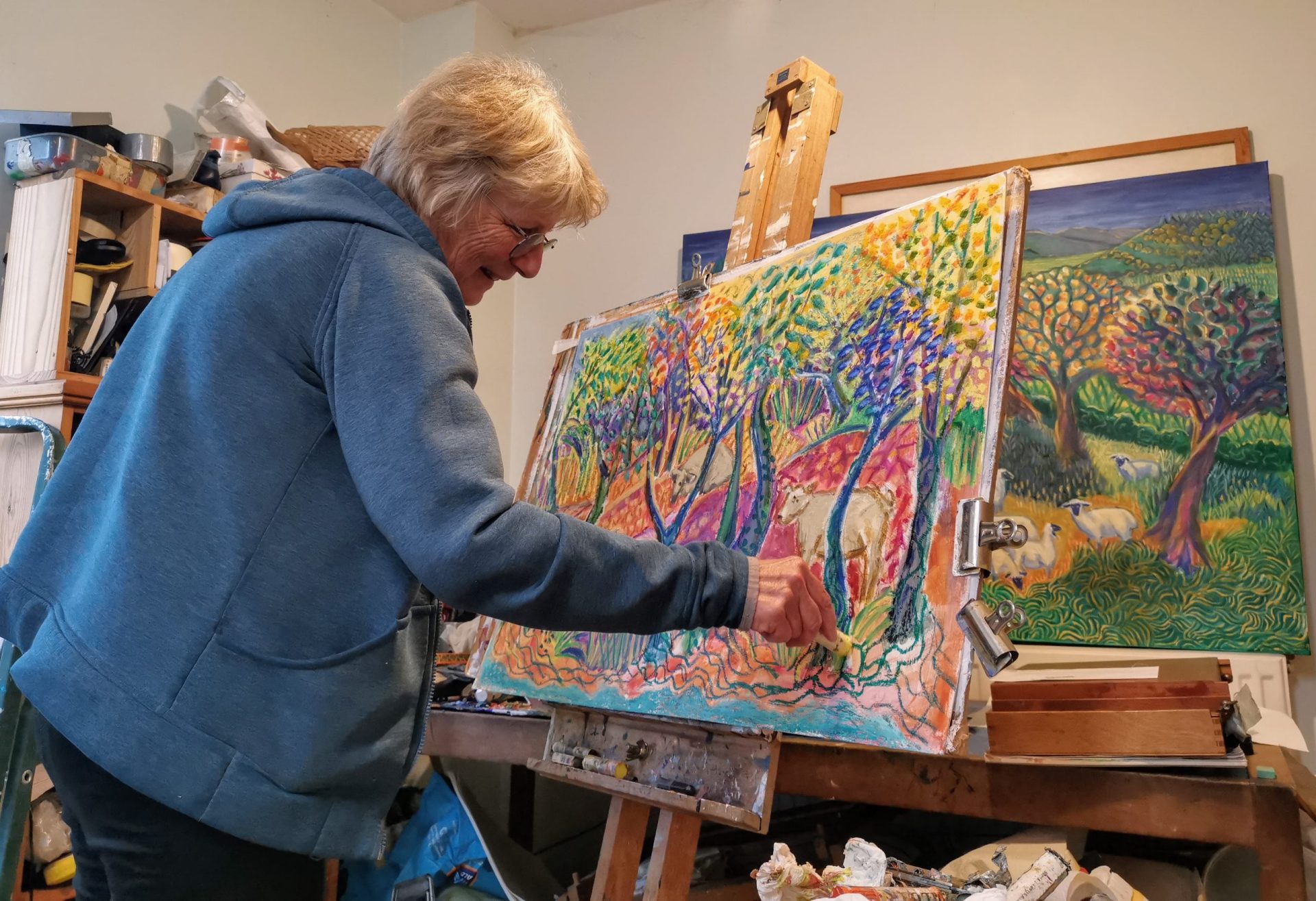 Posted at 13:28h in Core Artists, Interviews by HOTT

“People talk an enormous amount of bollocks about art. If you’ve got to write a thesis and put it up next to your painting you’ve rather missed the point of the visual communication you’re trying to make.” 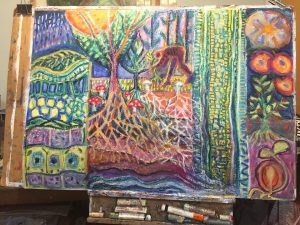 When did you become an artist?
When I was a small child, I saw things other people couldn’t see. Luckily, I was given a paint box instead of being sent to a psychiatrist. I couldn’t leave them alone. I painted and painted. I was probably about four years old and I got upset because I used them so much I’d worn holes in the bottom of the paints.
My mother was very arty, her first husband was a sculptor. My father was a barrister with a passion for sailing. When I was 12 my parents took us off on a great sailing adventure around Europe and the Mediterranean over to Morocco and across to the Canary Islands.
My father wanted to sail across the Atlantic to the Caribbean but we’d just sailed through the worst-ever storm and a family vote was held, I voted with Dad but everyone else voted to go home. I often wonder how different life would have been if we’d won that vote!
There were four of us kids and two Dobermanns squished on a small boat for 18 months. It was a very formative time, it changed my world view forever. I painted and drew all the time we were away and even though we were living on a tiny amount of money, my mum always made sure I had paper and oil pastels or marker pens.
When we got back I didn’t believe in school any more. I had a lot of trouble fitting back in. My parents moved many times when I was young, I went to seven different schools, most of them weren’t interested in supporting me doing art but my parents always encouraged it. My mother’s grandfather was a painter who supported a wife and six children on it, so art wasn’t regarded as a strange thing to do in our house.
I did my foundation year at Bath Academy, I wanted to do painting but at that time fine art consisted of people getting naked, painting themselves blue, and playing volleyball – someone else filled a room full of grass. So instead I applied to do a degree in graphic design, I got a place but stupidly turned it down – I could’ve earned a living doing that. Instead I went to London and studied decorative arts where I learned lacquerwork and gilding, skills which I later used when I set up an antique restoration business which I did for 10 years.
There was a very strong emphasis on drawing at the art school and I spent many hours in the life drawing room. On leaving I signed on and happily painted for a year or two. I got a job as an archaeological illustrator at Bristol Museum which I did for a few years but I kept painting and collected together enough work to have an exhibition at the Holland Gallery in Holland Park, London.
I got married, had children, got divorced and found myself trying to run the restoration business while looking after a new baby and a toddler on my own. It was a very difficult time for me and the kids. In the end I buckled under the strain and had a breakdown. In the space of a year I lost my marriage, my business, my home and finally my sanity. They were dark times. But all that was long ago.

I always kept painting.
I gave up trying to run the business and took to earning a living as a gardener. It was just by chance that I took to gardening. Just being outside you don’t over-think everything, you can’t. Gardening doesn’t allow too much introspection, it helps to ground you. Art is similar, you don’t know how much time has passed when you’re painting. Bits of your brain switch off, other bits light up. You’re engaging your imagination in a fairly safe way.

What inspires you to paint?
I think if you’re a very imaginative person you need a method of ‘earthing’ that. You need to pull ideas out of your head and fix them on a canvas or they will just go on buzzing round inside you and drive you nuts. That’s why, for me, the only point is to paint things you can’t actually see in the real world. I could paint very realistic landscapes but I cant really see the point. I paint what it feels like to be in nature, not what it looks like. A painting is a painting and nature is nature, they are not the same thing, but people seem to get them muddled up.
Visual imagination varies a lot between people. Some people cant visualise at all, some do it a bit, I can’t stop it. That’s caused me problems in the past but I’ve found ways of dealing with it over the years and its rarely a problem now. 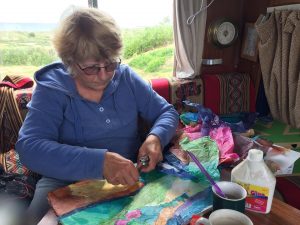 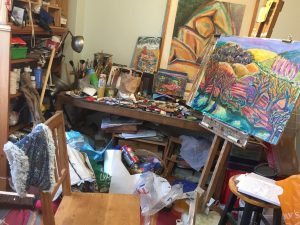 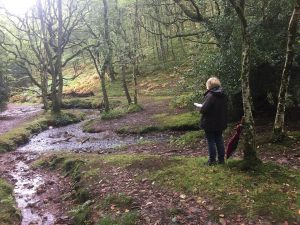 What is your medium?
It varies, I love to draw and that’s mostly what I do when I’m away in the van. At the moment I’m using tissue paper collage with paint and ink on top. I use acrylic a lot in combination with oil bars, I also use oil paint.

What are you going to do next? (much of Sara’s work shows activity over time rather like a comic strip).
I’d like to go back to the time-based idea, that’s what interests me. Its a huge challenge to paint the process of events, the unseen workings of a photosynthesising leaf, for example, that’s something I’ve tried. It was the first of a series called ‘The Way Things Grow’, I sold that particular painting but I want to explore that theme further. My life was on hold for 10 years while I looked after my mum who had dementia; when she died I decided to draw a line and start again. I want to spend the rest of my life doing my own thing, putting all my energy into my painting.
If people want landscapes I’ll do them, if that’s what they want to buy, but I promised myself I’d spend the last third of my life doing what I want to do without worrying too much what anyone else thinks. I really love painting figures, my landscapes often seem a bit empty if I don’t put in a figure or an animal. I really like painting people doing things.
We have this idea of painting in the West where everything has to be in perspective but if you look at Indian paintings, or medieval icons, its the most important thing that’s biggest in the frame, not the closest. I often change the scale of things in my pictures.
Some of her paintings show Sara doing mundane tasks throughout the day; cleaning a toilet, loading the washing machine, a trip to the hairdressers, she
explains: Every day life is gorgeous, its worth painting. 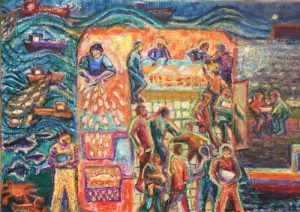 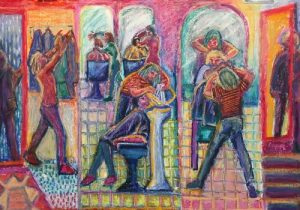 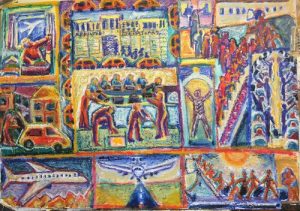 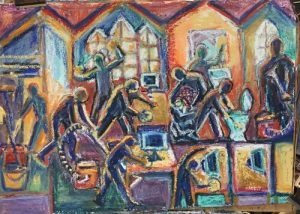 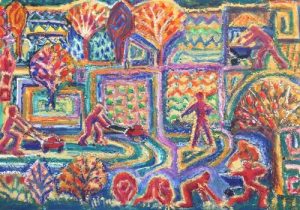 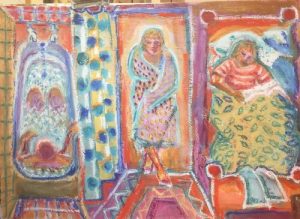 There’s a wonderful view of Glastonbury Tor from outside Sara’s house, she tells me:
I resisted painting the Tor for a long time, I do now, because its part of the world I live in – it seems disingenuous not to put it in from time to time. 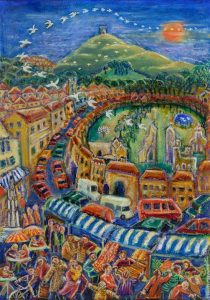 What’s your relationship with the Heart of the Tribe gallery?
Kim contacted me when I was doing a mural and I went to see her at the gallery. She was very friendly and supportive. The lockdown helped as I wouldn’t have had time to do all those murals had I not been furloughed from my job at the Abbey. I painted murals on Jacob’s Ladder and Ashwell Lane as well as one in Bristol, I’ve also got a commission for one on Hamlyn Road which I’ll do in the spring.
Becoming one of Core Artists at Heart of the Tribe has been an affirmation. I found it really pleasing when Kim came round to visit and went off with an armful of my paintings. It’s really nice to have someone believe in you. 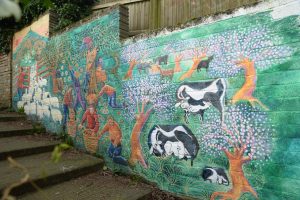 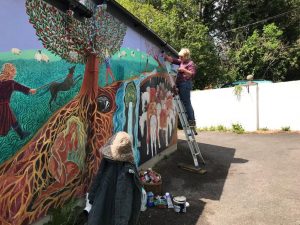