Posted at 17:48h in Core Artists, Interviews by Vicki Steward

Shelley was born in Salisbury and grew up in the sleepy village of Donhead St Andrew (on the Wiltshire Dorset border). She comes from a long line of artists, including her grandfather and aunt, her mother was a designer for Liberty and her father was a woodcarver and furniture maker. “I was desperate to leave the countryside back then. Quaint cottages, fields and winding lanes. Nothing much happened and I had my eye on London”. 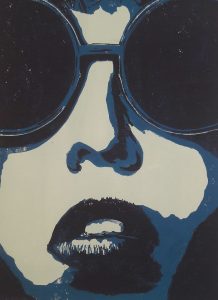 Shelley spent her time climbing trees and drawing, she recalls being told off for making a mess all over the dining room table. She always knew she would be an artist and excelled from an early age winning certificates and art prizes. When she was eight she illustrated her sixteen year old sister’s biology homework, her sister got an A plus for the work.

“At 11 or 12 I had a very clear idea of what I was going to do, I was very focused and determined. I was ambitious and wanted to use my art to somehow move away to London and work in a design agency, which is exactly what I did”.

“I love the whole vintage, retro 1920s to 1980s style. It goes back to the 70’s – Saturday afternoons watching the wrestling with my Dad, then he’d be off to his workshop to carve. I’d watch Saturday matinees on BBC2 – musicals, the silver screen, Westerns. Back then there were only 3 channels!”

“Even though I grew up in an idyllic environment, I was actually badly bullied throughout school. People were jealous of my artistic ability and I was quiet – so an easy target. I think this has a lot to do with my determination to prove people wrong. It’s quite an important chunk of years that affected my mindset towards art and how I was going to use it.”

Her parents, particularly her Dad, encouraged her in her art. “He was very practical, my focus comes from him. Often I wonder “‘What would he think?” Even the day before he died he was in his workshop gilding, determined to get a piece finished, my stubbornness is from him too. Someone once said I couldn’t make a living out of a hobby – it just made me even more determined. You have to keep going, having faith and belief in what you’re doing and just go for it.”

She left school in 1989 at sixteen and went to Salisbury Art College, studying for a National Diploma in Graphic Design. Two years later she left home to study Graphic Design Higher National Diploma in Plymouth. And finally a BA Hons Graphic Design at University in Exeter. The course encompassed typography, photography and illustration and equipped her to produce art for business and industry. She enjoyed the independence and studying with like-minded people in a creative environment. Altogether she spent six years in art education.

Even while Shelley was still at University she was contacting companies seeking work, one of these was Usborne, the children’s book publisher. They asked her to come in, she hadn’t realised she was being interviewed for an actual post, so was stunned to be offered a job as Junior Designer. Usborne had to wait for her to start, as she still had four months to go before she finished Uni.

She moved to Tooting Broadway in order to take up the job and met future husband Wayne, who was studying Urban Regeneration at Westminster. They moved to Greenwich and after 5 years at Usborne she took a job at YO! Sushi for a year or so as an inhouse designer, An opportunity to relocate back to the South West arose. They found a cottage in Croscombe, moving there in 2001 and getting married in the same year. Shelley worked in Bristol for a while in several design studios and advertising agencies, but then decided to work from home after starting a family. Her children are now five and eight, they have their own place in her studio for their art materials.

Shelley set up as an arts and crafts workshop Leader in Wells, the job didn’t just involve teaching but also coordinating all the advertising and press, designing the website, organising tutors etc. The workshops took place at the Sub House (now sadly closed) and for Somerset Skills and Learning.  She still continues to teach workshops for both children/adults and currently volunteers as an Artist in Schools for both state and private schools throughout Somerset.  She’s also the Founder of Wells Arts Community Network. 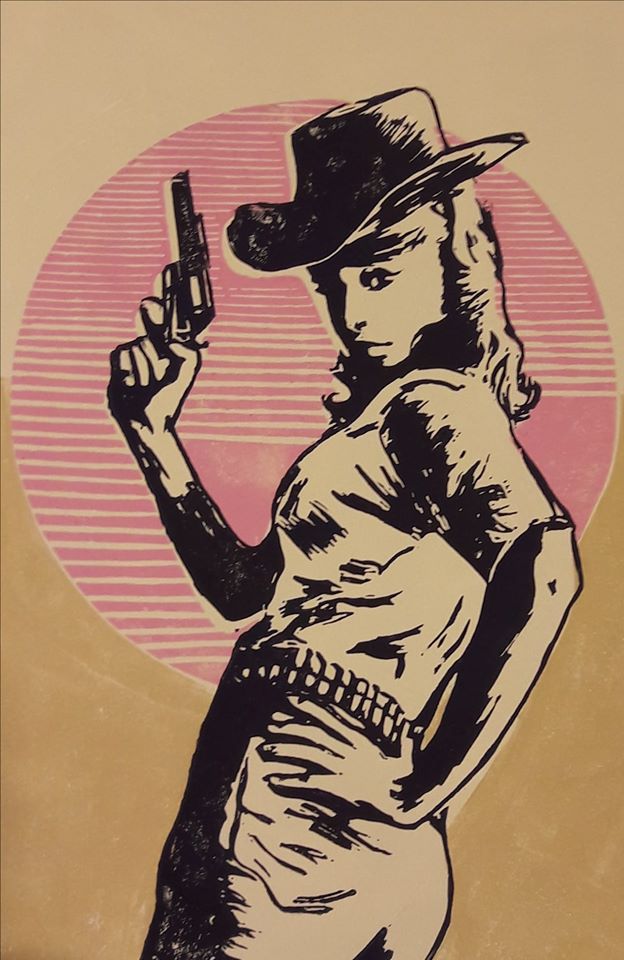 “It took a long time to find my style, when I did it was purely by accident. My Dad died, leaving a workshop full of tools. Struggling with painting a canvas one day, I went out to the workshop, where I rediscovered his carving tools and some of which were for cutting lino. When I started carving, I cut myself a lot! I ordered more tools, rollers and ink. Self taught I worked on the dining room table and produced ‘Magpies’ and ‘Cine Girl’. I put them on display at the Sub House. The style was quite retro which people really liked.”

She paid £25 to enter ‘Cine girl’ in the National Open Art online competition (NOA) and was amazed to find she’d got through to Stage 1, then Stage 2, finally it was announced that her piece had won the National Open Art Print Prize 2017. There was a cash prize and exhibitions at the Bargehouse in OXO Tower Wharf and at the Pallant House Gallery. Shelley saw her art being exhibited alongside the work of artists whom she really admires such as Warhol, Litchenstein, Peter Blake and, in a gallery which houses one of the best collections of Twentieth century British art in the world. It was, she says “A really big thing!”. The piece then sold – to the person who was later to become her agent. 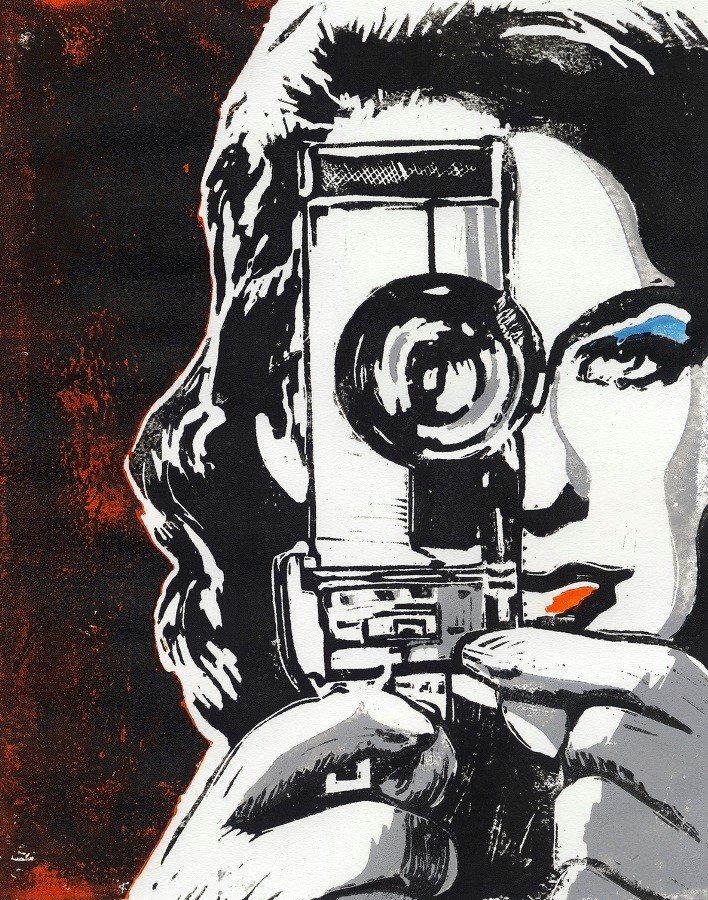 Heart of the Tribe

Shelley is quite proactive on social media and saw that there was an open art call for a new gallery opening in Glastonbury, right on her doorstep. She was impressed by the gallery’s ethos which embraces community, family and spirit. “It’s really refreshing that Heart of the Tribe is going in a different direction from the obvious fairies and Green Men which seems to be associated, now with the town. I think it will give Glastonbury its edge again. There’s a place for some cool art, it needs a refresh”.

Shelley’s specialism is block work lino print, which she combines with painting and gilding. The gilding began after she found her Dad’s old gilding kit – literally a treasure chest of gold leaf and brushes. “I make sure I always use at least one of Dad’s tools in a gilding piece. It feels like there’s a piece of my Dad there with me and makes the work even more personal”. 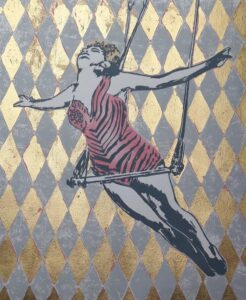 “I have put pieces on the back burner, then returned to them with fresh ideas, when the time is right. Creating an artwork is about mark making, just one wrong mark and you change the whole effect, particularly with linocut. I hold my breath when doing detailed pieces, I can’t listen to music with too much of a beat while I work, it has to be ambient. Everything slows right down, even my breathing”.

“I make my living through my art and workshops. I don’t miss designing, it had its place, it created a path for me which lead me to where I am now, but it was about pleasing other people, now I’m pleasing me. It’s great that there are people out there who appreciate the kind of art I’m trying to do. I have done commissions, but then people want it in my style, so it’s a compromise”.

Most of Shelley’s workshops are in lino cutting, she’s the resident artist and an art teacher in schools too. She’s helping Cathedral School in Wells and Chewton Mendip school with their Art Weeks and is a volunteer teacher at the Blue School. She genuinely loves teaching, but only began when she got brought into school as her daughter’s ‘show and tell’. She bought pre-cut lino blocks and gave the kids a chance to ink and print, they loved it. She’s even running an assembly now, talking about what it is to be an artist. 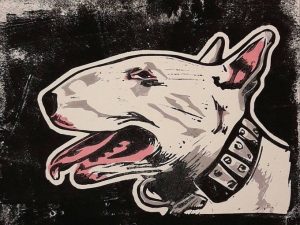 I notice that many of her images are of women and ask if she considers herself to be a feminist artist. “I think people get a bit scared of the word ‘Feminist’, but at the end of the day, we all deserve to be equal whether you’re male, female, black, white, skinny or large framed. Hopefully this is reflected in some of my art. I do seem to sway towards strong iconic female images. ‘Trapeze’ is one image that celebrates the daredevil, risk-taking, larger ladies & évocateurs out there. The ladies in bra & knickers are called ‘The Three Graces’. I love the fact that they are chunky girls, standing around with cigarettes and big pants. They just don’t care what people think”. 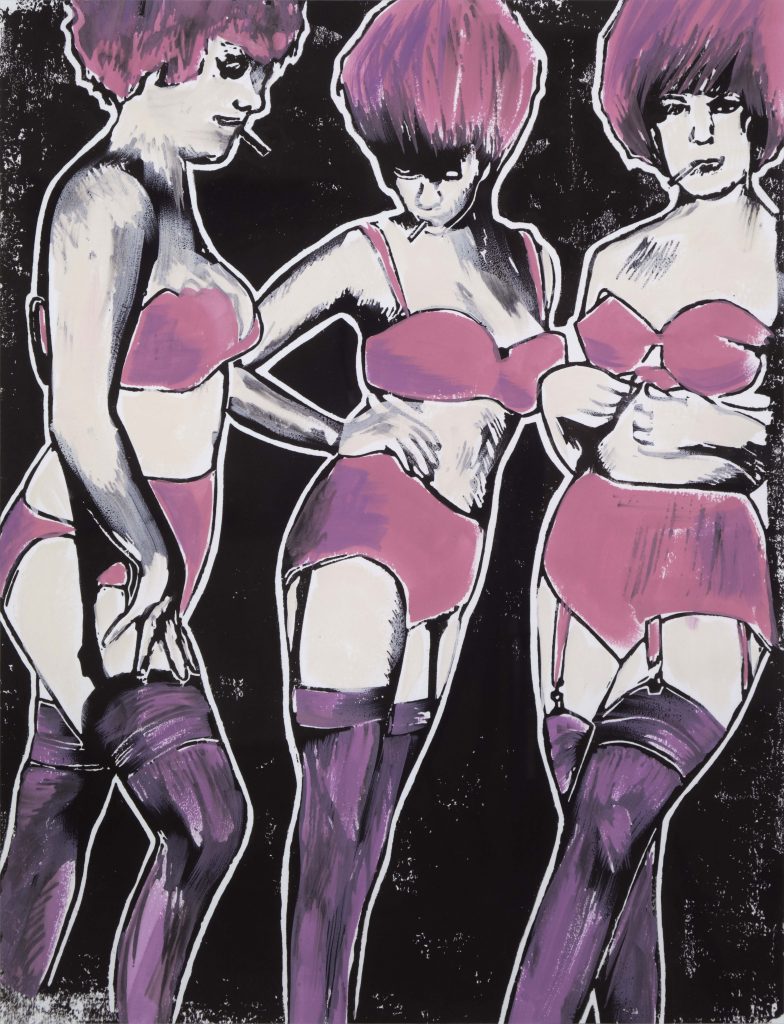 “Art provokes emotions within people, that’s the whole point. When I’m creating it provokes an emotion and a feeling during the process. People see my pieces and go “That’s me” They find a connection, they find their story with it”.

By Vicki Steward, writer of Normal for Glastonbury